Posted at 00:15h in Uncategorized by Tom DeWeese

And it’s time we brought them under control. 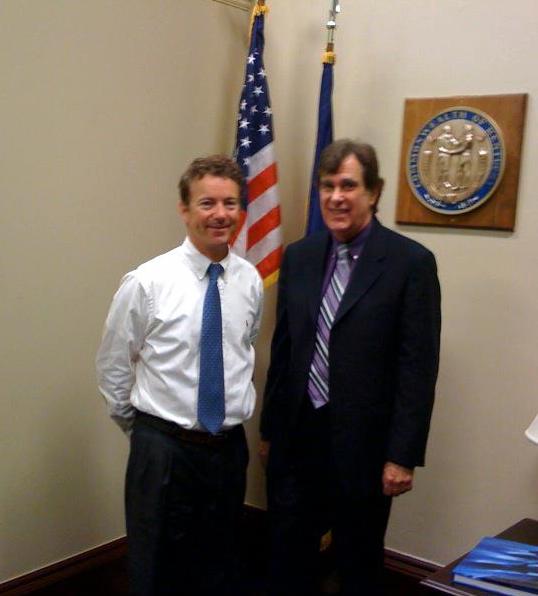 Senator Rand Paul (R-KY) has introduced a bill to do just that. It’s called the Defense of Environment and Property Act of 2013 (S. 890).

Senator Paul’s Bill is vital for the protection of private property, independent businesses and personal freedom. Sen. Paul’s bill is a new weapon to stop enforcement of Agenda 21 policies.

That’s why it’s urgent that you sign the petition to Senator David Vitter (R- LA). He is co-chairman of the U.S. Senate’s Committee on Environment and Public Works. Your petition to Sen. Vitter urges his support for S.890 so that we can finally put a stop to the outrages of these outlaw agencies.

We need Sen. Vitter’s support to get S.890 passed out of the Environment Committee and onto the floor of the Senate for a full vote. I need thousands of these petitions signed and delivered to Senator Vitter.

Please sign your enclosed Citizen’s Petition in support of S. 890 now, and send it back to me so that I can personally deliver it to Senator Vitter.

Why do I call these federal agencies Outlaws?

Because they are destroying people’s lives under the pretext of enforcing federal law, particularly the Clean Water Act. As a result, they are locking away millions of acres of private land – using the excuse of protecting the environment.

Most recently, residents of Riverton, Wyoming were shocked to discover that the EPA had literally given their town to an Indian reservation.

How is that possible? An agency of the federal government cannot just decide to give away a whole town and change the border of a state. Only Congress can do that. Our Federal government is out of control.

Property rights in America – your right to own and control your own property — are being destroyed by outlaw agencies like the EPA.

Under Barack Obama, the EPA and the Army Corp of Engineers are making it virtually impossible for land owners to live securely on their own property.

This is a tyranny orchestrated to enforce the policies of Agenda 21 and Sustainable Development.

Your home could be next. No property is secure.

But you and I can stop it.

Senator Rand Paul is doing everything he can to protect us. He is fighting in the Senate where dictatorial Senate Majority Leader Harry Reid is doing all he can to build the power of government as a force to destroy our rights.

Senator Paul is leading the fight to stop him. You and I must stand with him. He cannot fight this battle alone. But together we can force passage of this vital bill and put a strong leash on the EPA.

First, we need to build support for Senator Paul’s Bill, “Defense of Environment and Property Act, S.890.” And that battle starts in the Senate Environment Committee with your enclosed petition.

S.890 defines exactly what a “navigable water way” is. It is not a mud puddle or a temporary runoff of rain water. How sad it is that a Senate Bill has to clarify these definitions for government agencies entrusted to comply with the law.

But that’s what must be done.

And Senator Paul’s bill also makes it mandatory that Federal agents get written permissionfrom the property owner to enter their land. No more sneaking!

And finally, Senator Paul’s bill tells the federal government that, if it takes private land, thenit has to pay double the value of the land to the landowner.

Why? Because once the government declares that land is a wetland – the property value plummets. Doubling the price will help enforce the “just compensation” provisions of the 5th Amendment to the Constitution.

S. 890 will help stop implementation of the UN’s Agenda 21 that the EPA and these other federal agencies are working to secretly enforce.

I need thousands of these signed petitions to build support for the bill.

Senator Vitter is the Republican leader of the Senate Environment and public Works Committee. But he can’t move this bill out of the committee for a Senate floor vote without massive support for the bill. We have to force our way past the Democrat majority.

Only by flooding the Senate Environment and Public Works Committee with signed petitions can we have the power to force S.890 onto the Senate floor for a vote.

But it won’t happen without our efforts! So please sign your petition today.

Second, will you also include a contribution to the American Policy Center (APC ) with your signed petition? APC has been on the front lines fighting these agencies for many years.

In fact, APC is one of the only organizations that’s been in this fight from the beginning. I have personally worked with some of the victims I’ve described here. I have shared their tears and frustrations and I pledged to get justice for them.

You and I must stop these outlaw agencies before they ruin the lives of more innocent Americans. Your financial support of APC will help make sure that happens.

You have seen what APC can do when we take on a battle. The huge national battle now raging across the nation against Agenda 21 is a direct result of APC’s 20 year fight to expose this massive UN threat. I never gave up. I kept fighting against all odds. And as a result – today we are making huge progress in stopping Agenda 21.

Your financial support is all I have to wage these battles. No corporations will give us grants because APC is too controversial. Nor will any large foundations – for the same reason.

And that’s OK with me. I much prefer to be supported by dedicated individual supporters like you. That keeps APC independent and much more effective in our fight against the tyrannical forces like the UN and the EPA.

But that means it’s more difficult for me to raise the funds I need to fight these battles to stop our out of control government. I’m counting on you!

Will you help me lead this battle to pass Senator Rand Paul’s Defense of Environment and Property Act (S.890) so we can stop these outlaw agencies. I promised Senator Paul that APC has the firepower to get the job done for him. Please help me keep that promise.

That’s why I need your contribution of at least $25 today. If you can donate as much as $50, $75 or even $100 or more I’ll be able to get thousands more petitions into the hands of concerned Americans nationwide. – and build a national outcry against these Federal land grabs.

Whatever amount you can send – I urgently need it today. Senate Majority Leader Harry Reid will do everything he can to kill S. 890 so that these outlaw agencies can continue to terrorize American property owners.

With your signed petition to Senator David Vitter, and your generous contribution to APC today, we can win. Just as we are winning battles against Agenda 21 in communities and state legislatures across the country.

But it won’t happen without your help.

Please join me in this battle to stop these outlaw agencies.

P. S. You and I have watched as Congress has surrendered our liberties. We have lost many battles in the fight to save our precious Republic. But, I can tell you for a fact that Americans across the nation are beginning to stir and fight back.

Building support and passing Senator Rand Paul’s Defense of Environment and Property Rights bill (S.890) will drive a stake into the very heart of the EPA’s tyrannical policies. You and I must assure this bill passes. Please take just a minute to sign your enclosed petition to Senator David Vitter, Co-Chairman of the Senate Environment and Public Works Committee. And please write a check to APC to help me lead this fight!! Thank you.